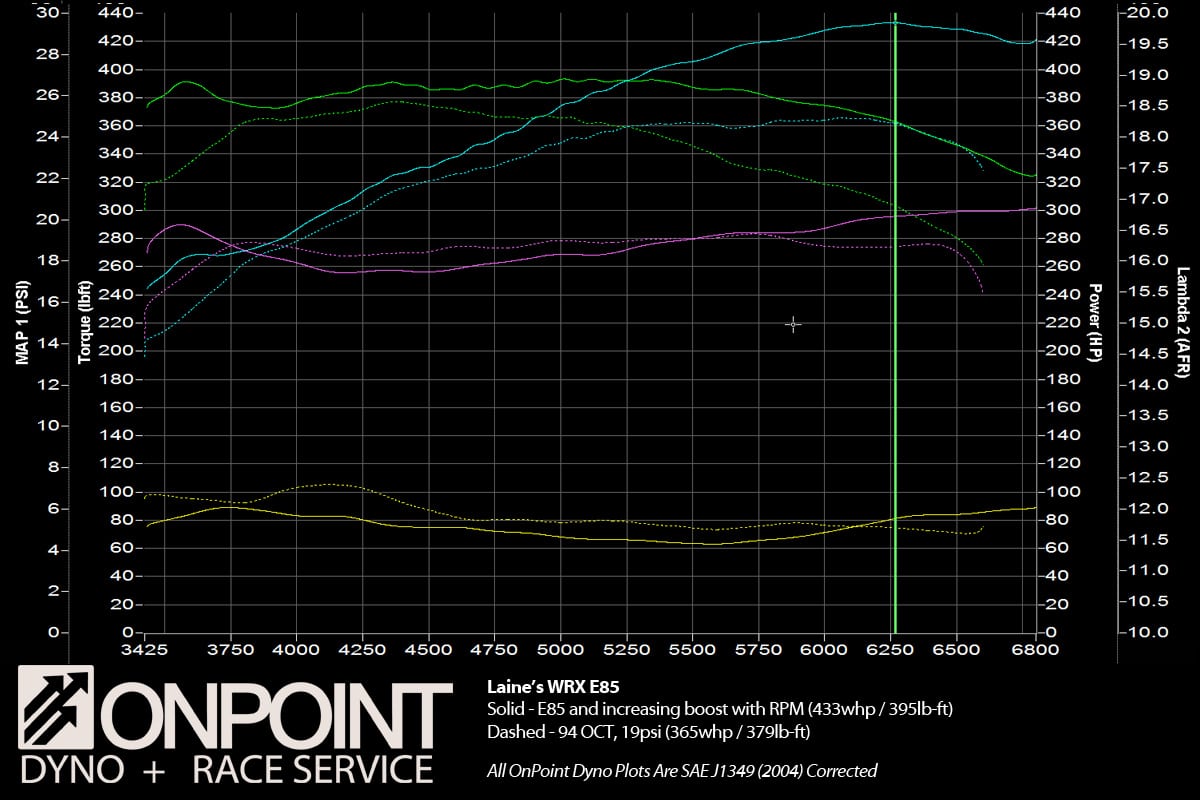 At Touge Tuning we always strive to be at the forefront of new products or developments in the industry.  Part of this is getting the opportunity to test a new product whether it be on track or dyno testing.  Recently we were approached by Shellbourne Fuels with the chance to test out a new fuel option from them which is their Ethanol based fuels.  For those of you in Ontario and most of Canada you will know that Ethanol based fuels such as E85 are pretty much non-existent.  The jealousy of big power numbers seen from cars south of the border has grown over the years as flex fuel tuning options have become more prevalent. 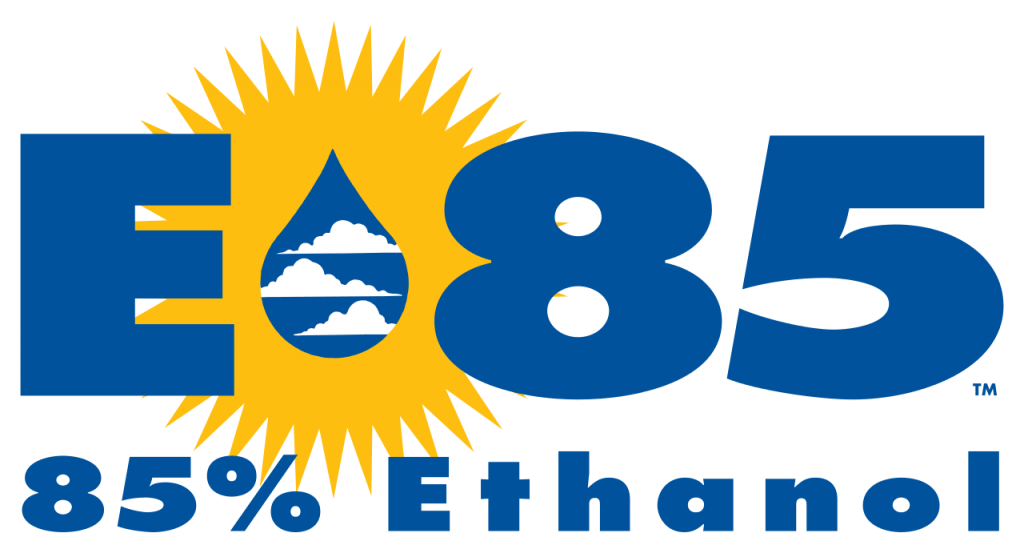 With the recent release of the COBB Flex Fuel kit and the ability to use the AccessPORT to tune for different Ethanol contents on a single map was timed perfectly with the new fuel available.  So we decided to do a test on one of our customer cars that was recently completed with a Full Race EFR7163 IWG Stock Location turbo kit and ETS Front Mount Intercooler amongst other upgrades.  This car made 360WHP and 370WTQ on Ultra 94 from Petro Canada at 18-19PSI of boost.  This is pretty good power but from what we were seeing the EFR turbos seem to really wake up when allowed to run much higher boost levels such as when running an Ethanol based fuel or race gas.  So we went about getting this car set-up for Flex fuel and a new tune. 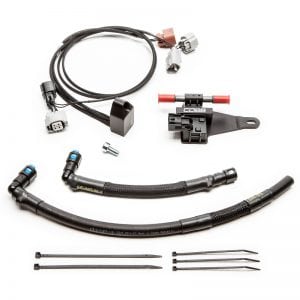 The first part was the COBB Flex Fuel kit which includes the Ethanol Content Sensor and then a module to convert the signal to a 0-5V output.  The kit is very straight forward to install and connects in-line with the Rear O2 sensor for power and the TGV Connector for input into the ECU.  The second part we knew would be needed was an upgraded fuel pump as the demand for fuel was going to be roughly 60% more in the E85 region and the DW65c currently in the car was not going to keep up.  We chose to install an AEM E85 compatible 320LPH drop in pump, this is still slightly on the limit based on the expected power numbers with this set-up so we may need to look at doing a double pump if we really want to push things further.  With everything set-up we ran the car as a baseline on 94 octane to get a baseline for the day and ended up at 365whp and 378WTQ which is very similar to what was made previously.  As a note the enthanol content was 10% for the straight 94 octane.

We then filled the gas tank with Ethanol until we reached the desired mixture which ended up being E75 based on the amount of 94 Octane we still had in the tank.  With the ethanol in we let the car idle for a bit and the analyser was very quick to respond to the change in ethanol content which was good to see.  With a base map roughed out Sasha from OnPoint began the tuning process and right away  we ran into our first hurdle, or 2 I should say.  The first issue was that the stock fuel pressure regulator’s base pressure of 43.5PSI was not providing the injectors enough fuel to keep up with the demand.  The second “issue” was the car made a huge jump in power with very little changes to boost.  The car made 433WHP and a purposefully restricted 394lb/ft of torque since it is a 2009 Subaru WRX and was still running the original 5-speed gearbox.  At this point the owner decided it was best to try and keep the power down to around 400ish until the 6-speed swap was done in the future.  However based on what we saw it would not be difficult to get upper 400’s out of this set-up with the Ethanol which is pretty awesome!  With a limited increase of 20WTQ (could easily have made 450+) and 70WHP gain in horsepower the results do speak for themselves.  With typical race gas prices ranging from $5-7/L the option to run ethanol for a power boost is very appealing.  We’re able to offer Ethanol fuel at around $2.50/L presently which means you’re saving 2-3 times over Race gas with better power in many cases. 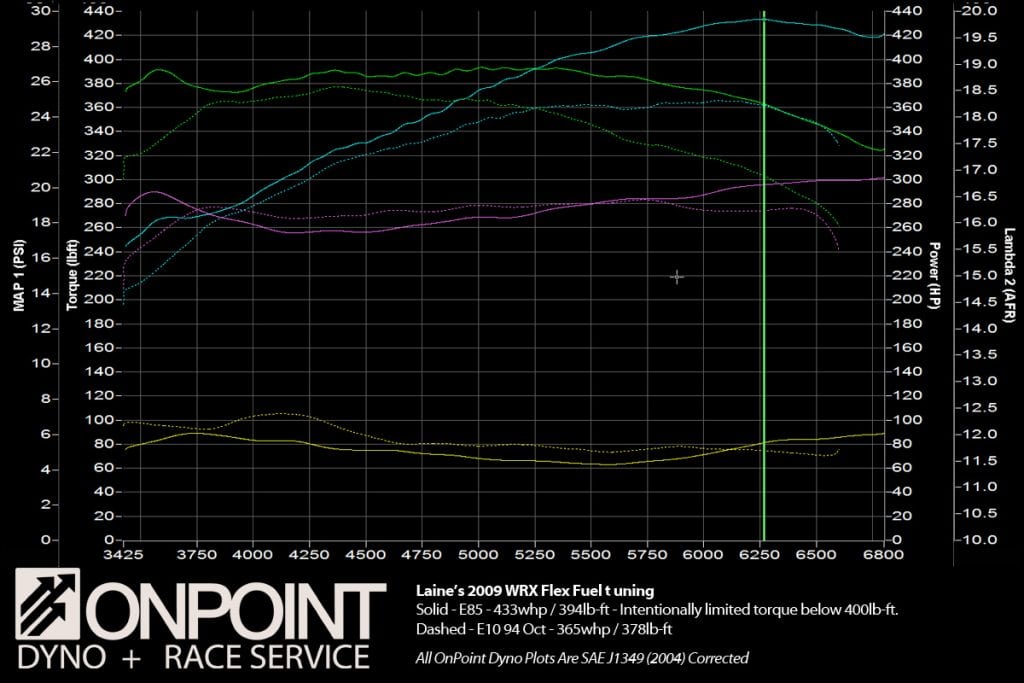 While the results were great we wanted to look at another set-up that would be more common within our customer base.  So we used a car that we’ve posted about before which is a 2015 Subaru STi that has almost all the bolt-ons including injectors, fuel rails, EL Header, Turbo-Back, Intake, Fuel Pump, Adjustable Regulator etc.  In preparation for the tuning we did a compression test to make sure the motor was healthy.  We then added the COBB Flex Fuel Kit, AEM Fuel Pump, New 1-Step Colder Plugs and a Grimmspeed Top Mount Intercooler.  With the parts on we again had OnPoint Dyno get to work on the tune starting with a baseline of straight 94 octane which was reading around 11% ethanol content.  As a baseline we were able to make 298WHP & 332WTQ which was a little less then we’ve seen on this car in the past but it also was about 14-15 degrees Celsius hotter as well as significantly more humid.  With the base numbers confirmed and dialed in we then drained the fuel tank down as much as we could and then filled it up and were able to get the ethanol content up to E80.  Sasha then went to work tuning the car and with this setup was able to extract 393WTQ and 344WHP.  The HP maxed out as the turbo would simply not produce anymore boost with the heat and humidity.  OnPoint then had us remove some mixed fuel and add back in 94 to get down to 2 other ethanol content levels to dial in the middle areas so that the owner can simply run whatever he wants from straight 94 to E80 and the tune will adjust for it. The owner has reported back that the E80 tune is amazing and he really loves the power increase.  After switching back to 94, even though it made only 45whp less, he said the car just feels neutered in comparison to the ethanol setup. 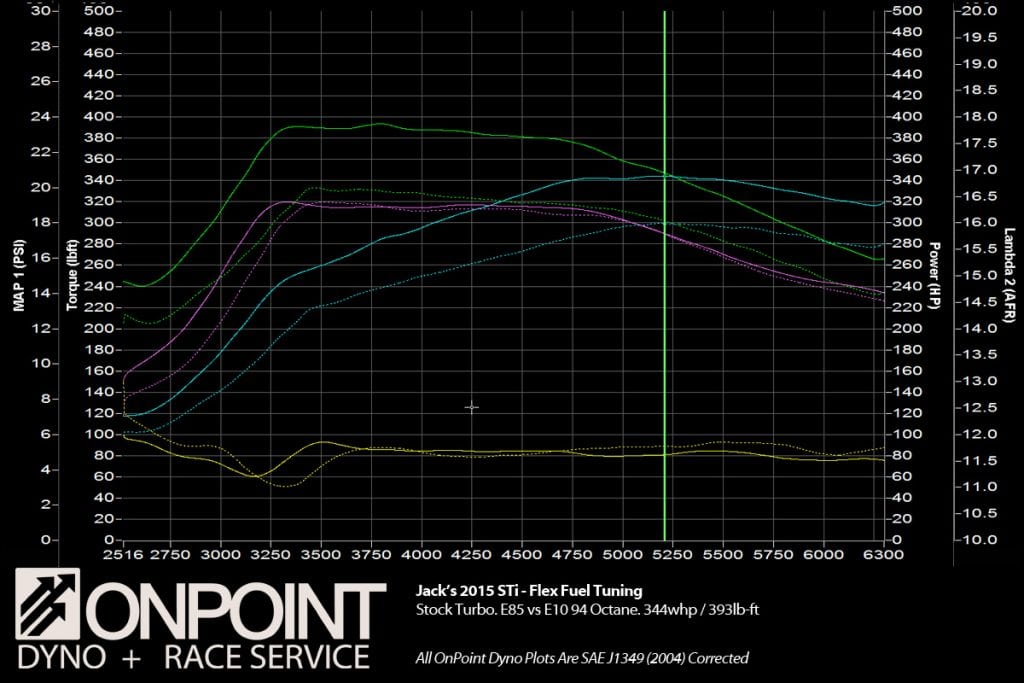 So if you’re interested in extracting the most power safely from your 2008-2017 Subaru STi or 2008-2014 Subaru WRX we’re now able to offer you the parts, installation, tuning and fuel as needed.  We can sell you Ethanol by the liter but also by the barrel if you’d prefer to have it ready to go whenever you want it.  There are some factors that need to be considered when looking at this upgrade.  The biggest one is the fuel systems capability.  If you’re starting from a stock fuel system it is much easier since the parts necessary can be selected.  However if you already have injectors or a fuel pump you may end up needing to replace these parts with ones that flow significantly more fuel.  The below chart will give you an idea of the required injector size needed for the power level you’re looking to achieve.  In the higher power levels the fuel pump will be one of the critical choices as you will need enough flow to meet the demand of the injectors.